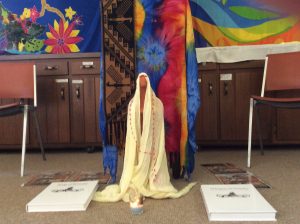 The Ballet of Water + Stone Gathering

Our Littlebig Family of the Sacred Heart.

I wish to acknowledge the Sacredness of Mother Earth.

I wish to acknowledge the quiet place or even the open space that each of us choose to hold or define as sacred.

I wish to acknowledge the Elemental Children.

I wish to acknowledge the Elders and the Grandmothers and Grandfathers of the First People who were gifted guardianship of this Turtle Island Land and all who come from that line.

I wish to acknowledge all who call this fair land home.

I would like to ask for blessings and wellness on all our Littlebig Family of the Sacred Heart members who may be sick or distressed.

I would like to ask that our brother, Elder Cecil Cross be given the necessary strength and energy from Spirit to allow him to serve our brothers, sisters, and the children in Italy with the best intentions of heart and mind.

Tihei Mauri Ora – We Breath and have life.

Waitaha, the Water Carriers are a Matriarchal Nation of Peace Loving People from Aotearoa, New Zealand. Their ancient customs and protocols have been handed down from one teaching generation to the next for as long as memory can recall. 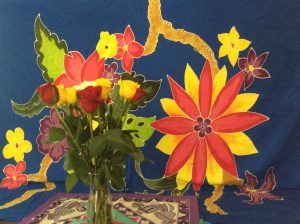 The day for the Elder began with a quiet prayerful ceremony at 6am. The dancing Light within the flame of the Blue Travel Candle was petitioned to bring our traveling family safely to Yellow Springs.

At Rockford, later that morning, prior to the commencement of the gathering at 11am, another important ceremony is usually performed. It takes place just inside the front door entryway. While a chant is being offered by the Elder, the water that Grandfather George had obtained from the sacred Yellow Spring is transferred from its container by the Grandmothers and slowly poured into a crystal bowl that is sitting on one of our Tuahu, Altars, while petals of white roses are sprinkled into the bowl one by one from each person who has kissed the petal with a prayer. All participants then must dip their hands in the water in a symbolic ceremony of washing away of the material world in preparation of a day dedicated to spirit.

Usually this is a small private ceremony with only the Elder and Grandmothers participating, but due to the unusual circumstances of the day, Littlebig Family members had been given permission to bring their belongings into the building, and then return to the outside assembly point. Those sisters and brothers who were caught in the web of ceremony were asked to stay and participate. It was a nice way to start our day. Something intentionally orchestrated had, with unintended consequences, evolved into another very organic process and felt more natural. It set the tone for the rest of the day.

Earlier, the Grandmothers had strung a multi colored ribbon across the entrance doorway in such a way that required all who entered to bow low. In Elder Raymond TeKorako’s teachings, this ribbon symbolically turns the doorway into an entryway to the womb. The returning “home” to the ancient house of Learning, and to do this we must all bow low in humility as we go through that portal. Our aged and disabled had the ribbon lifted for them. Elder Raymond’s teachings profess that it is from that position of humility and deep mindfulness of the process that the individual will be able to reconnect to those higher levels of understanding within him or herself.

At the allotted time, the Grandmother gave the Karanga, the call for the assembled gathering to enter Rockford.

In silence everyone followed the protocol of lowering themselves under the ribbon at the entryway. They removed their footwear and proceeded to the water bowl and then into the Chapel. Our day was to begin with a guided meditation.

Members of our Littlebig family that were missing from our gathering due to illness, family situations and unforeseen circumstance. Our thoughts and prayers went out to you all.

The Meditation, titled the Truth of Power told the story of how a young man goes out into the physical world and sends his heartfelt plea into the realm of the Elemental Gods searching for the answer to death and asking, after everything else has been considered, “Is death the final power?” Finally, arriving at what he thought was the end of his failed quest, he finds himself back at the beginning where he had initially started his journey and discovers that his question has been realized.

Elder Raymond presented our first story, which was titled Identifying the Water and Stone People.

The story’s premise suggests Water People follow the seasonal patterns of Cyclical Time, and in the natural order of their circular repetitive model they will continue indefinitely. Stone People, on the other hand adhere rigidly to Linear Time, a framework that has a beginning and an ending. A straight-line model that defies the natural order of things and a beginning that is premised on the presence of an outside agency. One reveres Earth Mother, and the other has no other option but to pay homage to that Outside Agency who has had to become Extraordinary. Like all mix and matches, our rainbow tapestry has ensured that our world today has mostly become water and stone. But, there are remnants of Water Peoples, and maybe one day – they will truly show us the meaning of Extraordinary. 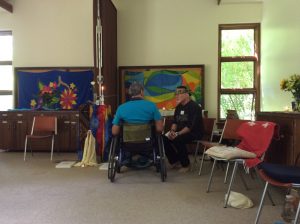 Sharing a meal, conversations, laughter, stories and tears is all part of what it means to belong to family and community. These shared meals are important in establishing our common dreams and aspirations for the Littlebig Family Community.

An Indigenous view of Non-Separation

I had asked our sister from Tennessee, Lj Ratliff if she would like to help me tell this story. It was written and would take nearly 2 hours to read. Once I started writing this story, I couldn’t stop writing. Lj kindly agreed. She did well, more than that – extremely well when it came to reading and pronouncing the Maori words. My late, older brother Mackie, who was the traveler before me, had a favorite saying. Lj knew my brother and she knew his favorite saying. And so Lj, for your wonderful help, from both Mackie and I “We love you baby!!!”

1+1=1, a lovely journey of recollection by the Elder of his two-year spiritual odyssey to the outback of Australia in the late 1960’s as a sixteen year old, beginning in the State of Queensland at Brisbane traveling north to Townsville and west to Mt Isa. Later the journey of discovery included the sacred sandstone monolith of Uluru and the red-rock domes of the Kata Tjuta formation in the South Western corner of the Northern Territory. Kata Tjuta, the Sacred Space for the Indigenous Women. Later he would travel north to Darwin and to Arnhem Land.

A very special salute was given to Matua (the late Uncle Clem) from the Northern Territory of Australia and Elder Raymond’s traveling companion, guide and teacher. To Grandmother Daisy from Mt Isa, I still walk with your hand holding mine and when I’m down, your arms are the stepping stones that lift me high. Together, we listened to the song of water. Sweetheart, wherever your released, renewed and regenerated, spirit has manifested itself in the Cosmos, thank you. Do you remember that glorious, early morning music?

The Ballet of Alignment, Dancing a Life of Acceptance

This was the title of our final presentation and it was a weaving together of all the issues that had arisen from the previous two talks, and the questions those talks had posed. Ballet can be explained as a way of telling a story through poses, steps and flowing movements, while Alignment, is to array on the side of a cause. At the same time, Littlebig Family members who may have had questions for Elder Raymond TeKorako were asked to air them and he promised to answer them if he could. This closing segment of our day together also included individual statements.

We closed our gathering with a group Circle Celebration and a family photo.

Grandmother Peggy sent me an email later Sunday morning advising that Lisa, who attended our gathering from Ashtabula OH, had rung her at 11.22pm Saturday night to say she had arrived home safely, and then Grandmother Peggy had put the flame of our original Travel Candle to rest.

Thank you Lisa for sharing your time with us.

Meanwhile, traveling southward, returning home on a Greyhound Bus to Tennessee, our Lj’s life was about to be “rocked!” Her bus had mechanical problems, and thanks to Facebook we were able to sit with her during the ordeal.

My Jenny, who was keeping guard over our sister Lj via Facebook, instructed me to light a candle for Lj and send her comforting prayers. I placed a blue Travel Candle on our Altar and kindled it and sent Lj and her travel companions a soft song to warm their spirits. With a replacement Greyhound bus, our sister finally arrived home at 4:17 am Monday morning, a long day with teachings and lessons still to be uncovered and explored.

Tihei Mauri Ora – We breath the breath of life.

My name is Raymond TeKorako Ruka. I belong to a matriarchal peace nation from Aotearoa, New Zealand called Waitaha, the water carriers. I live in Yellow Springs Ohio with my beloved wife, Jenny. I am an Elder and Tohunga (priest), and I speak on peace and love.